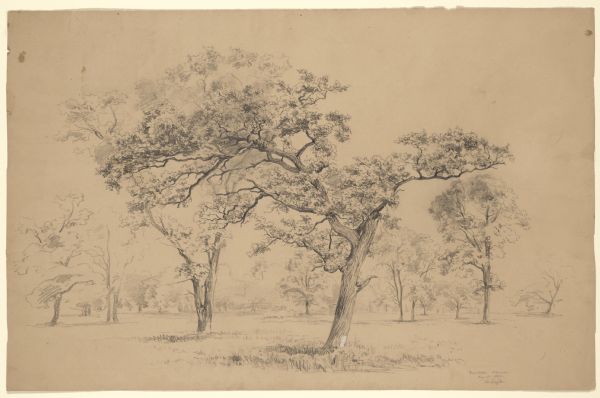 Despite its more common associations with the great grasslands of Africa, the word savanna was born in the New World. When Spanish explorers in the Caribbean inquired about the strange (to them) landscape of widely spaced trees surrounded by grass, native Carib people told them that they called it “savanna.” Spaniards carried this appellation with them throughout the New World and then planted it in Africa too.

The standard ecological definition of savanna, “any plant community where trees are a component but where their density is so low that it allows grasses and other herbaceous vegetation to become the actual dominants of the community,” hardly captures the beauty of this once exotic and now exceedingly rare landscape. Early European travelers to southern Wisconsin were entranced by the oak savanna they wandered through. George Feathersonhaugh, an Englishman, walked from Mineral Point to Madison on a tour of the Midwest in the early 1840s, a time when little of the savanna had been cultivated. In his A Canoe Voyage up the Minnay Sotor, Feathersonhaugh described the rolling hills and oak savanna between the two towns as “one of the most exquisitely beautiful regions I have ever seen in any part of the world.” He continues effusively with no sense of hyperbole:

In whatever direction our eyes were turned, the most pleasing irregularities of surface presented themselves. But that which crowned the perfection of the view and imparted an indescribable charm to the whole scene, from the knoll where we stood to the most distant point where the alternate hills and vales blended with the horizon, was the indomitable grace with which the picturesque clumps of trees, that sometimes enlarged themselves into woods embellished this rural landscape from the hand of nature.

Feathersonhaugh is hardly alone in his wonder at the beauty of Wisconsin’s oak savanna; time and again nineteenth-century European travellers describe Wisconsin’s oak savanna as “parklike.” English travelers, like Feathersonhaugh, especially wondered at the beauty of landscapes which naturally appeared like the grazed and manicured lawns of English estates. Just as obelisks and columns remote from a manor house provide scale to massive English gardens, solitary savanna oaks gave a sense of landscaped proportion and grace to the scene.

Feathersonhaugh’s description of the landscape as one “embellished . . . from the hand of nature” is more correct than he knew. The savanna landscape was a pastoral landscape in the sense that it was not a pure, untouched, natural wilderness; instead, it depended upon active human management and maintenance. Native inhabitants managed the landscape with fires to open it up for hunting. Lightning strikes too kept the landscape free of the brushy understory that overwhelms southern Wisconsin deciduous forest today. The burr oak, Aldo Leopold reminds us, is covered in fireproof armor. While the grass and impertinent tree and shrub seedlings are consumed in prairie fire the burr oak’s thick bark protects it. Leopold died of a heart attack fighting a wildfire. 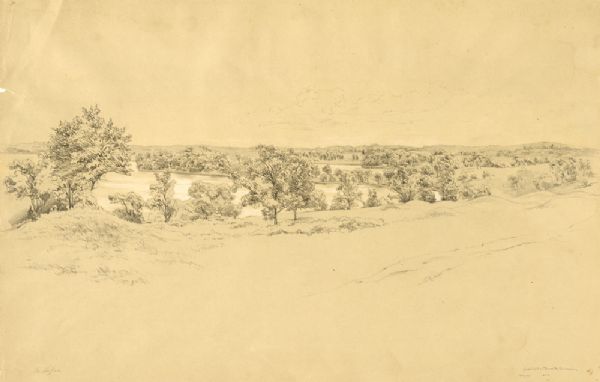 Prior to white settlement, oak savanna was the most common plant community in southern Wisconsin, covering an estimated 5.5 million acres in the early nineteenth century. Today it is the rarest. It has been all but completely eradicated by fire suppression (which allows woody shrubs and quick growing tree species such as maple, to enclose the openings in a dense understory), cultivation, and grazing. Old sentinel oaks can still be found at the edges of fields or in the middle of woods. They are distinguished by the wide reach of their branches. Unlike forest oaks that shoot straight up to capture a narrow opening in the canopy, oaks that grow up bathed in prairie sunlight spread out in regal splendor. While oak savanna has disappeared, you can see a cheap knockoff when you look out over fields of ripe corn, beans, or wheat at a lone maple, ash, or oak left in the middle of the field for shade by a farmer who plowed by horse or by roofless tractor. German artist Adolf Hoeffler made a tour of Wisconsin in the early 1850s and captured Dane County’s oak savanna in beautiful pencil drawings just before it disappeared. 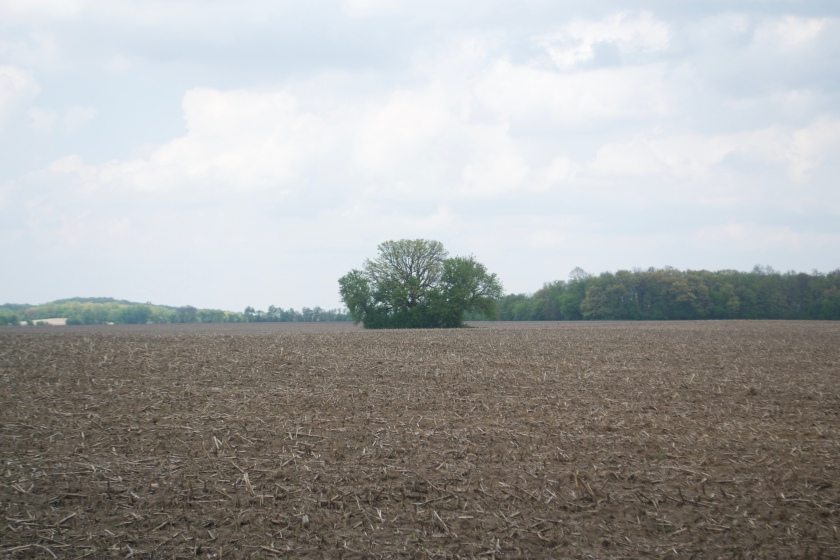