As a decrepit father takes delight
To see his active child do deeds of youth,
So I, made lame by fortune’s dearest spite,
Take all my comfort of thy worth and truth.
For whether beauty, birth, or wealth, or wit,
Or any of these all, or all, or more,
Entitled in thy parts do crowned sit,
I make my love engrafted to this store:
So then I am not lame, poor, nor despised,
Whilst that this shadow doth such substance give
That I in thy abundance am sufficed
And by a part of all thy glory live.
Look, what is best, that best I wish in thee:
This wish I have; then ten times happy me!

As we were getting ready for bed last night, my seven-year-old asked me, “If you train really hard, do you think you would like to climb the Nose someday?”

The question wasn’t totally out of the blue.  We had watched The Dawn Wall the night before.  It’s the remarkable story of Tommy Caldwell and Kevin Jorgeson’s first ascent of the Dawn Wall of El Capitan, the the hardest big wall climb in the world.  Peter understood the movie’s message well —  except for just a couple of people, the Dawn Wall is impossible to climb.  So he asked if I was interested in climbing the Nose, which is easier.

The Nose is also really hard.  Warren Harding, Wayne Merry, and George Whitmore, spent 47 days climbing it in 1958 to complete the first ascent.  They drilled bolts and hung on gear the whole way up.  Nobody climbed it without hanging on bolts and gear until Lynn Hill freed it in 1993.  In the 25 years since Hill’s first free ascent, only a half dozen people have repeated the climb. 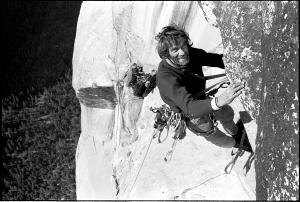 So when Peter asked if I was planning to climb the Nose, I answered immediately and decisively, “No. It’s too hard.  I’m too old.”  A look of shock and dismay spread across his face.  He was crestfallen.

Peter’s dejection was born out of his experience watching me climb. Since the first of the year I’ve been climbing a lot.  Feeling old and out of shape, I started training again like I did in my mid-20s.  I’ve taken the kids along several times.  I belay them and they watch me boulder.  Peter knows that I can climb things that he can’t even start. He thinks I am very strong.  I can do pull-ups and push ups.  I can carry him sleeping from the car to his bed.  I can lift rocks and logs that he can’t push.  I open plastic bottles that his hands can’t twist. He doesn’t know how sore my back can get from sitting in a chair.  He doesn’t know that I pull hamstrings and quads if I don’t jog and stretch for twenty minutes before I climb.  He doesn’t know how much I worry about my finger tendons.

Though he’s not as absolutely strong as me, Peter is a really good seven-year-old climber.  He moves with balance and boldnesss.  He’s often too short to reach holds set for adult climbers, so he figures out clever, reachy solutions. He moves off of tiny handholds that are really just foot chips with amazing finger strength.

A moment after I told him that I would never be able to climb the Nose, I added, “But you might be able to do it someday.”  His look of dismay broke, and a huge smile broke across his face.  “Maybe I could lead it and then help you up,” he said.  “I would love that,” I said, unable to contain my own enormous smile.

Not fifteen minutes later, I found him trying to traverse from a door jam to a window casing along the baseboard in bare feet.  It was a really great move; he was super stretched out and barely got a finger tip to the window casing.  I am pretty sure he was pretending to be Kevin Jorgeson on pitch fifteen.