Between AD 700 and 1100, residents of what is now Wisconsin built at least 1300 mounds. Robert Birmingham, a former Wisconsin State Archaeologist, advocate for mound preservation, and the world’s foremost authority on Wisconsin’s mounds notes that this grouping is “a greater concentration than anywhere else in North America.” At the center of this mound frenzy are the mounds of a region that the Ho-Chunk call Taychopera or “the Four Lakes” which is today the Madison metro area and Dane County.

Less than ten percent of the Wisconsin mounds that were known to early-twentieth-century archaeologists remain intact. Most mounds were destroyed by plows or urban development, others were raided by antiquities dealers and early amateur archaeologists. Today, archaeologists employ less invasive study methods, geophysical survey techniques, for instance, that peer into mounds like a CT scan. While some of last century’s mound destruction was nothing short of wanton vandalism, some other mounds were destroyed unwittingly. Unlike, say, the Washington monument or Mount Rushmore, most of Wisconsin’s mounds are integrated into and reflect the surrounding landscape. Because mound builders aimed for harmony instead of spectacle and because a millennium of settling and vegetation growth have softened mounds’ outlines, they can be difficult to spot. Today, some are recognizable to the untrained eye only because some agent of the state or a tribe has marked it with a sign showing an outlined aerial view or a request to please keep off the sacred space.  Human inaction has also transformed the mounds that remain.  When they were built, Dane County’s mounds rose up above an open landscape of isolated oak trees surrounded by prairie grass.  Today, in large part because of modern fire suppression, hardwood forest with dense understory has succeeded savanna.  Some mounds now wear a ghillie suit of buckthorn, garlic mustard, and sugar maple making them all but invisible. 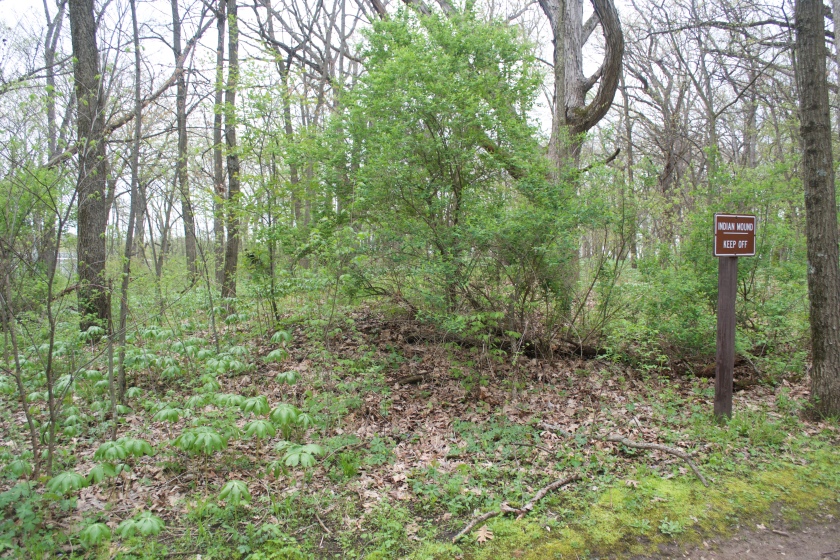 In southern Wisconsin, mound builders often chose really beautiful places to build their mounds. Mounds were almost always built in sight of lakes or rivers. The Mendota bird mound sits on a hill so high that it became, in the late 1990s, the place to watch fireworks on the Fourth of July. Few of the hundreds of thousands of people who crammed onto the hill knew that just over its summit and beyond the four story mental institution was a bird mound with a 640-foot wingspan. An early map of Lake Monona shows long, skinny mounds oriented perpendicular to the shoreline, crammed together like multimillion dollar Santa Monica beach homes, each claiming its few feet of lake frontage. Lapham’s map of the shore of Lake Ripley near Cambridge shows ten mounds including snakes, panthers, birds, and turtles. Precisely because these mounds were built in beautiful places, very few of them remain. At least two separate layers of foundations for vacation homes on Lake Ripley now dig down into the soil where the mounds once stood. So too with the many of the mounds along the shore of lakes Mendota and Monona in Madison and the Rock River in Fort Atkinson. But for Lapham’s maps in Antiquities of Wisconsin and the massive survey undertaken by Wisconsin’s first state archaeologist Charles E. Brown at the turn of the twentieth century, we might have no idea that these mounds ever existed.

Brown’s manuscript maps are an amazing record of Wisconsin’s pre-development archaeological landscape. In an process of pre-digital crowd sourcing, Brown collected reports from fellow archaeologists, amateur enthusiasts, and helpful farmers.  Browns files contain completed “Wisconsin Archaeological Society Reports,” newsclippings, and shakily written letters from old farmers.  Some of the reports of Indian camps or mounds or burial sites include internal corroboration and physical evidence others are simply rumors, “Mr. Johnson recalls Indians camping here when he was a boy.”  Brown recorded all of these reports onto a 1920s series of township plat maps in red pencil.  The Dane County index map is covered in red, a visible reminder that this part of North America was hardly an untouched wilderness when the first Europeans arrived in the seventeenth century.  It had been a rich cultural landscape for over a millennia.

Brown’s successor, the current State Archaeologist of Wisconsin, found me transcribing the red pencil lines onto my modern 7.5 minute USGS map one afternoon. He began his inquiry about what I was doing with the maps with the gentle and non-confrontational “I see you’ve found the Charlie Brown maps.” Then after a slight pause, he continued, “you know they are not accurate right?”  For the past hour, I had been obsessing at transcribing precise locations onto my map.  The scales between the original and my modern map were just different enough and roads had shifted ever so slightly enough over the ninety intervening years of transportation planning and development to make the task maddening. So ,o, no I did not know that Charles Brown’s maps were “not accurate.”

“What do you mean?” I retorted.

“Well, what are you doing with them?” he answered-asked.

I explained that I was an English professor at UW-Whitewater, I was writing an environmental and cultural history of Stoughton, and I was looking at the Native American history of the area around town. At the moment I mentioned the words “English professor,” the archaeologist’s anxiously furrowed brow released its tension and a look of understanding spread across his face. When I finished my abbreviated cv, he said, “Oh, for what you are doing, these maps are fine, but if you get into any serious stuff, they are way too inaccurate.” It was clear that he found my disciplinary and technical ignorance a comfort. The archaeologist was understandably concerned about relic hunting and trespassing but it seemed clear to him now that I presented no more a threat to mounds’ integrity or landowner’s property rights than the octogenarian genealogist sitting at the adjacent library table. I didn’t want him to take the maps away from me, so I didn’t protest that my research project was in fact “serious stuff,” but I felt indignation rise in my chest.

According to the portion of Brown’s map that I transcribed, a mound once stood along the bank of the Yahara River less than half a mile from my house. Another one sat on the far (east) bank of the river. Sometime between the 1920s and today, the closer mound was either plowed level, dug out for a foundation, or excavated to grade the railroad crosses the river nearby. The farther mound was probably inundated when the Yahara River spread out into a wide marsh behind Stoughton’s Millpond dam, but I hoped it had been spared.

One sweltering summer afternoon, months after my visit to the State Historical Society, I announced to my children that we were going to bike down to the river to look for these Indian mounds. Upon hearing the news and in complete ignorance of Wisconsin’s Burial Sites Preservation law (Wisc. Stat. 157.70), my four-year-old son began loading a spade and a Home Depot bucket into the back of the Burley bike trailer that his two-year-old sister was going to ride in. Our neighbor is a contract archaeologist whom developers call in a panic whenever they uncover a burial site when digging a foundation or grading a lawn. He is constantly unloading buckets and boxes of archaeological tools from the back of his Honda Pilot at the end of a day in the field. My children (and I) find his kit fascinating: levels, trowels, mason’s string, surveying flags, shovels, Sharpied sandwich bags containing thousand year old fish scales and mussel shells, potsherds, and bits of ancient deer antlers. I tried to explain to my four-year-old that our expedition was more of an initial survey than a full-blown excavation, but I succeeded only in talking him down from the spade to a garden hand shovel. I did know Wisconsin’s Burial Sites Preservation law (Wisc. Stat. 157.70), and I had no intention of letting him dig, but I thought I could delay his disappointment long enough so that he might forget. The fathers among you know that such compromises are often necessary to short circuit a child’s argumentative logic and that most times our bluffs are not called because a child’s mind is fickle and active. The rest of you can feel free to judge me.

We rode down to the river, crossed it, and then struggled up the bluff on the other side of the river. A row of fifteen-year-old houses stood between the street and the place where my map indicated the mound once stood. In front of one of the houses, we found a man and his adult daughter sitting in lawn-chairs in the shade of his open garage.   I showed him my map and told him about the mound that I thought might be in his backyard. It was news to him, and he was enthusiastic, probably because I had my kids with me. Just as he was offering to let us walk around his property to look for the mound, my son began unloading his bucket and garden shovel; “We’re going to dig for artifacts,” he announced confidently. “No,” I corrected, “actually we’re just hoping to have a look around.”

“But you said we were going to dig for Indian stuff.”

“Then why did we bring a shovel?”

“Honestly, I let you bring the shovel because – “

The man interrupted my own metaphorical digging what he thought was a generous offer, “You know, I don’t really care if you dig or not.”

“I care,” I said, “This is a sacred part of a people’s history, it’s not ok to dig. We were just pretending to be archaeologists.”

Confusion and four-year-old hurt spread over my son’s face. For a second I thought I could make out a cock crowing on the bluff across the river. I was nearly as crestfallen.

Both the man and my four-year-old seemed to understand that we were now all on the same page. The tension and awkwardness lifted slightly, and the man renewed his offer, “Alright, whatever, do you want to have a look around?”

“Yes please, “ I said, “let’s leave the shovel and bucket in the trailer, ok buddy?”

We didn’t find the mound.