Drumlins, as most geographic and geological dictionaries will tell you, are spoon-shaped hills that are the result of glacial processes. According to the Oxford English Dictionary, drumlin came to Wisconsin from an Irish and Scots Gaelic word for hill (drum/druim/drym). The suffix, -lin, is a Scots variant of –ling, diminishes the noun to which it is attached in the way that a duck is transformed into a duckling, a goose into a gosling, and a cat into a kitling, or as we say today, a kitten. 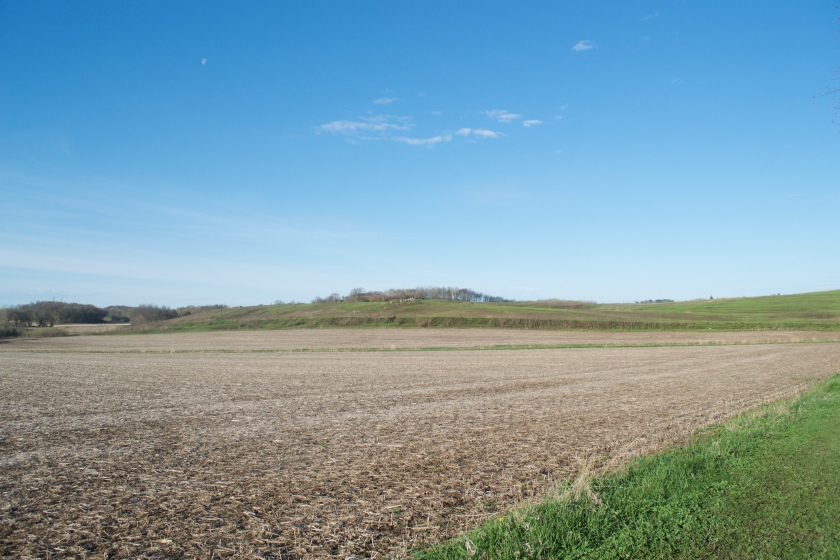 So drumlins are little hills. Except that they are not necessarily little. And except that they are not always hills. Dane County’s largest drumlins are more than 100 yards wide, thirty feet high, and nearly two miles long. The OED’s standard for hill is pretty low (“A natural elevation of the earth’s surface rising more or less steeply above the level of the surrounding land”), but the county’s smallest drumlins might not meet even this low mark. Some drumlins are inconspicuous to the point of invisibility both at ground level and on standard topographical maps; they only show up in aerial photographs that are taken in early dawn or at late dusk when these long, stringy swells cast thin shadows in low-angle sunlight. Until the advent of human flight, these invisible drumlins were the landscape equivalent of a tree falling in the forest that nobody hears. The OED’s suggestion to consider drumlins as small hills is less helpful perhaps than thinking about the other work that the suffix –ling can do.

While the suffix’s diminutive force is perhaps most familiar because of common words like duckling and gosling, -ling also suggests similitude, association, or metonymy. The OED’s first definition of “-ling” is “a person or thing belonging to or concerned with what is denoted by the primary noun.” Earthling, hireling, sapling and groundling are all examples that remain in use today; archaic examples include ierðling, plowling, plowman and rǽpling, ropeling, prisoner. Implicit in “belonging to” or “concerned with” is the understanding that the noun in question is not the thing that it is being compared to. Starlings have many similarities to twinkling lights in the night sky, but they are merely like distant spheres of flaming gas. Similarly, a drumlin has many of the characteristics of a hill (drum) but it is not necessarily a hill as such; rather it is a rounded rise that concerned with hills.

Fine a philological distinction as this may be, the Gaelic sense of drumlin as hill-like anticipates modern geology’s understanding of drumlin formation by at least 200 years. The manual Pleistocene Geology of Dane County, Wisconsin distinguishes between two types of drumlins: those that are stubby and those that are spindly. Stubby drumlins – and this is in fact a technical term despite its refreshing plainness – were hills prior to the ice age, but the glacier incompletely smoothed and flattened them into drumlins. Geologists aren’t really sure exactly how spindly drumlins were formed, but the best theory is that were fully made by the glaciers themselves, the sheet of ice laying down piles or lines of rock and sand and then smoothing them out as it slid over its own construction. Moraines are hills; spindly drumlins are smears. Unlike stubby drumlins that can skew off at any odd angle, spindly drumlins all line up parallel to each other and point like arrows to the direction of the long-melted glacier’s travel. Indeed, the Pleistocene Map of Dane County, Wisconsin represents drumlins as arrows, their heads all pointing Southwest from the Northeast. The Northeast corner of the map is covered in a barrage of arrows, thick as the sky over Agincourt. Drumlins suggest a more pacific association from the air during wintertime though. When the low winter sun casts long pink shadows, some drumlin fields look like pods of enormous whales cresting the surface of the snow to breathe. 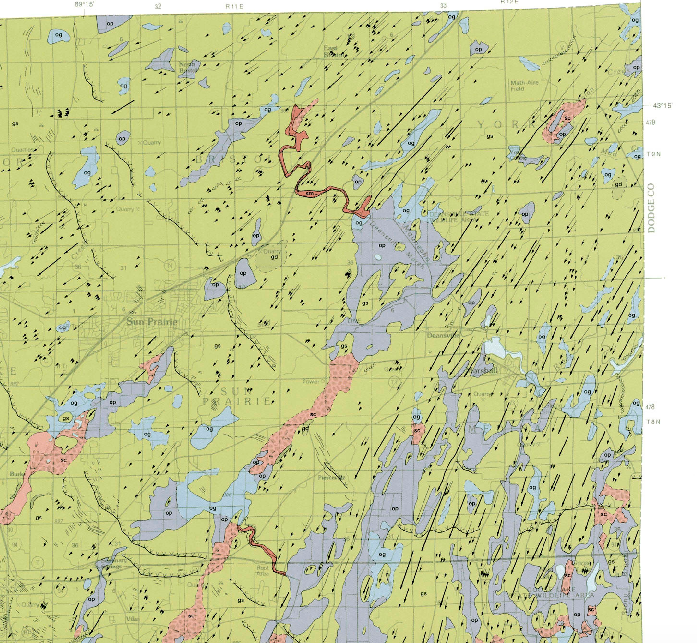